Spectators will once again enjoy live and in person, all the action the PGA TOUR has to offer 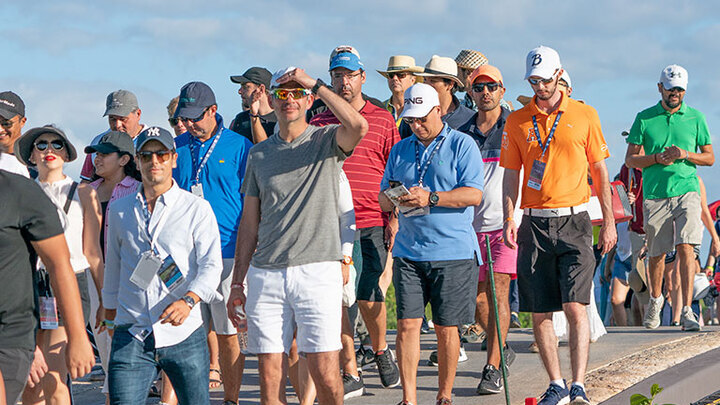 Spectators will once again enjoy live and in person, all the action the PGA TOUR has to offer

In exactly one month’s time from today, the World Wide Technology Championship at Mayakoba will crown its 2022 champion marking the 16th consecutive year the PGA TOUR has visited the Riviera Maya. This year will see World Wide Technology enter its second year as Title Sponsor, where it will join forces once more with Mayakoba and further the tournament’s legacy as a pioneer for golf in Mexico and Latin America, as well as celebrate the hospitality and beautiful landscape of the Mexican Caribbean.

From November 3 to November 6, 132 PGA TOUR players will compete in 72 holes of stroke play for a purse of $8.2 million dollars with all four rounds being televised globally through the PGA TOUR’s extensive worldwide television distribution network, including on Golf Channel in the United States and Golf Channel Latin America in Mexico and throughout Latin America.

Following two years with no public tickets due to the pandemic, 2022 will see the public welcomed back to Mayakoba as tickets are now on sale to witness the world’s best golfers tee it up at El Camaleón Golf Course and soak in the fantastic scenery of the Mexican Caribbean. Tickets are on sale now with pre-sale pricing at the tournament’s website www.WWTChampionshipatMayakoba.com.

Two-time defending champion Viktor Hovland will be back to defend his title once more. In 2021, he became the first two-time winner in the event’s history. Hovland, 25, has won three PGA TOUR events in his young career and is currently ranked No. 11 in the Official World Golf Ranking.

Joining Hovland will be a stellar field featuring a diverse group of players from across the PGA TOUR and professional golf. Headlining the list of those currently confirmed to participate are Americans Tony Finau and Billy Horschel, ranked #14 and #16 in the Official World Golf Ranking, respectively. Finau won back-to-back weeks on the PGA TOUR this summer and ultimately finished ninth in the final FedExCup standings. Horschel is a seven-time PGA TOUR winner whose 2021-22 season was highlighted by a victory at the Memorial Tournament presented by Workday.

Additionally, the field currently features several past Major Champions, including Jason Day of Australia, Lucas Glover of the USA, Francesco Molinari of Italy, Justin Rose of England, Webb Simpson of the USA and Danny Willett of England. 2022 will see at least six former champions return to Mexico—Brendon Todd, Patton Kizzire, Charley Hoffman, Harris English and John Huh are all scheduled to join Hovland in this year’s field. Emiliano Grillo, Mito Pereira and Jhonattan Vegas will represent Latin America once more.

Representing Mexico will be Armando Favela of Tijuana, B.C., and Sebastian Vazquez of Merida, Yuc, who earned their invitations via the Mayakoba Match Play and the Mayakoba Mexican Qualifier. This year will be the fourth appearance in the tournament for both. Lastly, Enrique Marin Santander will represent Spain as the winner of the Villa Magna Qualifier to Mayakoba which was held earlier this week.

Players for the field of 132 competitors have until 5 p.m. on Friday, October 28, to commit to the World Wide Technology Championship at Mayakoba and can withdraw from the tournament at any time. Further field announcements will be made in the coming weeks.

“Mayakoba is a very special place to me, having played my first PGA TOUR event there; I missed my first two cuts playing in the event, but it was nice to get some revenge and win the next two and I look forward to adding more to that,” Viktor Hovland said. “For me, the week of Mayakoba is almost like a vacation, it’s the best Resort I’ve ever been to, and the golf course is in excellent condition. It’s a perfect work-vacation balance, I love everything about it.”

Mayakoba and its four luxury hotels are ready to once more welcome the world and the PGA TOUR to Mayakoba, where the unrivaled Mexican hospitality will be on display as always.

“We celebrate another edition of the World Wide Technology Championship at Mayakoba with the same enthusiasm as always to continue contributing and making history in the world of golf in Mexico and Latin America,” Borja Escalada said. “Mayakoba has been a pioneer in holding this PGA TOUR tournament as a clear commitment to support the development of the sport in this region. Mayakoba is a benchmark for luxury and sustainable tourism in Mexico. We are very proud that this tournament is a window for the world to see what Mexico, Quintana Roo, and Mayakoba have to offer, with Mexican hospitality being one of the most important,” he added.

World Wide Technology continues firm in its commitment to support the game of golf and support the Riviera Maya community.

“We are excited to be in year two. The outcome of our first year was exceptional, our experience at Mayakoba was incredible, we also had a first-class champion in Viktor and we feel very confident going into this second year,” Matt Horner said. “World Wide Technology’s goal is to make this PGA TOUR stop the number one destination as we have the best venue in all of golf and we are certain that everybody that comes down to enjoy the event will have an unparallel experience.”

With just 25 days to go until tournament week, final preparations are underway for an extraordinary celebration of golf that will once more showcase the beautiful Riviera Maya and Mexican Caribbean region to the world.

“We are thrilled for what is going to be another spectacular edition of our beloved event,” Joe Mazzeo said. “From the pristine conditions of El Camaleón to another strong field of players and of course the warm Mexican hospitality, there is no doubt it will be another special week on and off the golf course. Thank you to World Wide Technology for their enthusiastic partnership and to RLH Properties for its leadership in making this event a continued success. We are especially excited to welcome fans back to the tournament and encourage everyone to get their tickets today, so you don’t miss any of the action.”