The Most Important Construction Companies in Mexico

The role of the armed forces in construction is increasing. Companies in the construction sector raise concern of unequal opportunities and competition in these types of conditions. 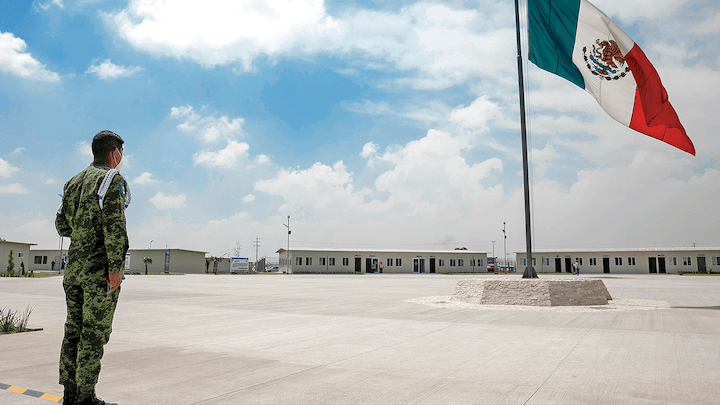 The Most Important Construction Companies in Mexico

The role of the armed forces in construction is increasing. Companies in the construction sector raise concern of unequal opportunities and competition in these types of conditions.

The scene has changed. Before, when imagining a military man, one thought of a person with the classic green uniform, with a combat helmet and a weapon in his hands. Now, it is more common to visualize them holding shovels and bricks and wearing construction helmets. Although there have always been engineering corps that build in areas of difficult access in the country, since 2018, the beginning of the administration of President Andrés Manuel López Obrador, armed forces have monopolized the construction of the government’s larger projects.

The industry is not very happy with this new role. 90% of the companies that responded to the survey applied to the participants in the list of “The most important construction companies in Mexico,” prepared by Obras y Expansión, said they disagreed with their participation in the industry. “They do not have the experience in several branches, and they generate delays in the construction of projects. They would be excellent supervisors.” “The construction sector is one of the main generators of income in the Mexican economy and, by giving these opportunities to the Army, the growth in the economy is impacted.” Comments like these were common among responders of the survey.

The Mexican Chamber of the Construction Industry (CMIC), which represents 9,000 companies, has a similar position. Francisco Solares, president of the organization, points out that the participation of the Army “results in a decrease in income for the State, because they do not generate income tax or VAT.” In addition, the conditions under which the Army builds are very different from those of private initiative. Actions such as the decree to classify the governments works as national security, give them advantages that construction companies have never had and therefore results in disadvantageous competition.

The decree stipulates that works can begin almost immediately, issuing provisional permits and licenses in less than five days. The final permits can be processed while the construction is underway, while the private sector must wait to meet the deadlines stipulated by law. In addition, the declaration exempts the Army from the responsibility of providing the necessary information about the construction, while the private industry is subject to public scrutiny.

An example of construction carried out under this scheme is the Tren Maya. Mainly focused on section 5, due to claims by activists about the impact of this structure on the ecosystem.

“The conditions in which the Army builds, are very different to those us, civilians, are subject to” Francisco Solares, President of CMIC.

THE WEIGHT OF THE ARMY IN CONSTRUCTION

In addition to its participation in the construction of difficult-to-access hospitals and other small developments, the Army took charge of projects classified as priorities for the federal government in 2021. One of them, was the construction of branches of the Banco de Bienestar, which in 2021, required an investment of 5,000 million pesos for 1,250 units, or the construction of National Guard barracks, for which in the same year, 4,750 million pesos were invested, according to information presented by the federal government. In addition, we could not forget the Felipe Ángeles International Airport (AIFA), that received 21,314 million pesos in 2021, for which the total amount adds up to 80,000 million pesos over two years (according to the numbers given by the authorities, although this figure has never been verified).

In total, these large projects amount to a total of 33,129 million pesos for the military forces in 2021, that is 32% of the Federal Governments’ total budget allocated just to priority works. In 2022, the Secretary of National Defense (Sedena) is participating in the construction of two and a half sections of the Tren Maya, whose total amount, which is not broken down by section, is estimated at 200,000 million pesos, in addition to the Tulum airport, which includes an investment of 9,985 million pesos.

Although the rise in the military’s involvement in construction has occurred at the same time as the decline in the industry, one does not cause the other. “The issue that is worrisome is not that large government projects are assigned to the Army, because companies can enter as subcontractors. The problem is the drop in investment in infrastructure that affects almost 20,000 construction companies, for this reason, production is not recovering”, considers Ricardo Trejo, Director of Forecastim consultancy, an economic and industrial activity analyst.

Investment in this sector has been falling over the last five years. According to the Ministry of Finance, in 2014 it represented 4.7% of GDP. For 2020, it only reached a mere 2.8%.

Efforts have been made to compensate for the lack of resources. In 2022, for example, the Federation’s Expenditure Program contemplated 17.7% more budget for infrastructure to support the economic reactivation; however, the majority was invested in priority works, such as the Tren Maya and the isthmus of Tehuantepec. Larger projects account for most of the budget allocated to infrastructure, which excludes medium and small companies from participating in projects such as road construction.

“We see that large companies are contracted for these flagship works, but there are a large number of small and medium-sized companies that have no place or power to negotiate with the government,” says Ricardo Trejo.

Infrastructure packages were also launched, with projects carried out between the public and private sectors, but until the first quarter of 2022, the SHCP only had 24 projects in the portfolio (out of 68) with 50.2% of the investment made. Of all the works presented since 2020, only one has been finished.

In response, private initiative bears most of the production in the country. The companies that participated in the ranking carried out by Expansión said that between 81 and 90% of their contracts in 2021 were in the private sector, but for there to be a rebound in the sector, more must be done. Trejo considers that, although private industry always has greater activity and production in Mexico, the construction of public works can counteract the drop in economic growth in critical times.

Hence, the repeated call of industry organizations, such as the CMIC, is to offer construction companies the same facilities as the Army and increase the budget for public works, mainly local ones, to make room for the participation of smaller companies, which in times of crisis are the first to disappear.

“Currently, 80% of the construction done in Mexico is with private resources and 20% with public ones. Last year, the government only invested 2% of the national GDP and it should grow to at least 5% for there to be some sort of growth”, explains Solares, from the CMIC.

While the problem is ignored and investments in public works are not enough to offset the weight of the Army and the damage of economic circumstances to the industry, the companies in the sector suffer. According to the CMIC, during the pandemic, more than 3,000 MSMEs linked to the construction industry closed.

2 Includes income from items not related to construction and real estate services.